Join Marcello Di Cintio with the Canadian Museum of Immigration on June 15 at 7 PM EDT/ 8 PM ADT. The Zoom Webinar event will be hosted by Kim Pittaway from the University of King’s College (Halifax, NS) and Marcello will be joined in conversation by several of the taxi drivers featured in the book.

Register for the event here!

In conversations with drivers ranging from veterans of foreign wars to Indigenous women protecting one another, Di Cintio explores the borderland of the North American taxi.
“A taxi,” writes Marcello Di Cintio, “is a border.” Inside every cab is a space both private and public: accessible to all, and yet, once the doors close, strangely intimate, as two strangers who might otherwise never have met share a five or fifty minute trip. In a series of interviews with Canadian taxi drivers, their backgrounds ranging from the Iraqi National Guard, to the Westboro Baptist Church, to an arranged marriage that left one woman stranded in a foreign country, Di Cintio seeks out those missed conversations, revealing the untold lives of the people who take us where we want to go.

Marcello Di Cintio is the author of four books, including Walls: Travels Along the Barricades which won the Shaughnessy Cohen Prize for Political Writing and the W. O. Mitchell City of Calgary Book Prize, and Pay No Heed to the Rockets: Palestine in the Present Tense—also a W. O. Mitchell Prize winner. Di Cintio’s magazine writing has appeared in publications such as The International New York Times, The Walrus, Canadian Geographic and Afar.

Learn more about Driven at Biblioasis!

The Practice of Translation 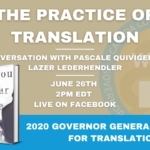