Blog - Latest News
You are here: Home1 / Events2 / Randy Boyagoda on Conversations on the Catholic Imagination: Why Dante...

Join Randy Boyagoda virtually at the Hank Center for the Catholic Intellectual Heritage in marking the 700th anniversary of Dante’s death—and his enduring influence on the Catholic imagination in theology, art, politics, and culture. Part of their series of Conversations on the Catholic Imagination.

The event is free and open to the public on Zoom. Register here!

Randy Boyagoda is the author of six books, including the novels Governor of the Northern Province, Beggar’s Feast, and Original Prin. His work has been nominated for the Scotiabank Giller Prize, IMPAC Dublin Literary Prize, and named a Globe and Mail Best Book of the year and New York Times Book Review Editor’s Choice. An essayist, book critic and radio columnist, he is a professor of English at the University of Toronto, where he lives with his wife and their four daughters.

Purchase your copy of Dante’s Indiana from Biblioasis here! 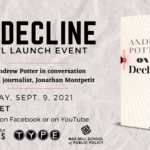