The Handover:
How Bigwigs and Bureaucrats Transferred Canada’s Best Publisher and the Best Part of Our Literary Heritage to a Foreign Multinational

Until recently, McClelland and Stewart had been known as “The Canadian Publisher,” the country’s longest-lived and best independent press. Its dynamic leader Jack McClelland worked with successive provincial and federal governments to help draft policies in the 1960s and 70s which ensured that Canadian stories would, for the first time in the nation’s history, be told and published by Canadians. M&S introduced Canadians to themselves while championing the nation’s literature, bringing to the world Margaret Atwood, Leonard Cohen, Mavis Gallant, Farley Mowat, Rohinton Mistry, Alice Munro, Mordecai Richler, and many others. When 75% of M&S was gifted amidst great fanfare to the University of Toronto on Canada Day 2000—“To achieve the survival of one great Canadian institution,” M&S owner Avie Bennett declared at the time, “I have given it into the care of another great Canadian institution”—one could’ve assumed that it would remain in Canadian hands and under Canadian control in perpetuity.

But one would have been wrong.

In her controversial new book, Elaine Dewar reveals for the first time how M&S was sold salami-style to Random House, a division of German media giant Bertelsmann; how smart businessmen and even smarter lawyers danced through the raindrops of the laws put into place to protect Canadian cultural institutions from foreign ownership while cultural bureaucrats looked the other way; and why we should care. It is the story not just of the demise of the country’s best independent publisher, it is about the threats, internal and otherwise, facing Canadian culture. The Handover is more than just a CanLit How-Done-It: it is essential reading for anyone interested in the telling of Canadian stories.

“Dewar is a keen observer of place and personality” —Publishers Weekly 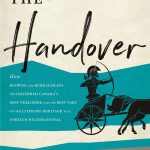 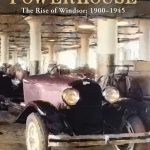 Border Cities Powerhouse
The Rise of Windsor: 1900-1945
Scroll to top