You are here: Home1 / judith mccormack 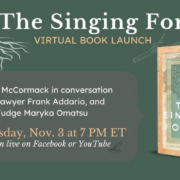 Last night we celebrated the launch of Judith McCormack’s The Singing Forest (September 21 2021)! Judith was joined by criminal lawyer Frank Addario, and author and Judge Maryka Omatsu, for a fascinating discussion and engaging audience Q&A. Afterward, there was a giveaway for the book.

And if you weren’t able to make the live event, you can still watch it below!

ABOUT THE SINGING FOREST

Judith McCormack was born in Evanston, and grew up in Toronto, with several years in Montreal and Vancouver. She is Jewish through her mother, and her maternal grandparents came from Belarus and Lithuania, with her father contributing his Scots-Irish heritage. Her writing has been shortlisted for the Writers’ Trust Fiction Prize, the Commonwealth Writers’ Fiction Prize, the Journey Prize and the Amazon First Novel Award, and her short stories have appeared in the Harvard Review, Descant, The Fiddlehead, Coming Attractions and Best Canadian Stories. She also has several law degrees, which first introduced her to story-telling, and is a recipient of the Law Society Medal and The Guthrie Award for access to justice.