Tag Archive for: let the empire down

You are here: Home1 / let the empire down 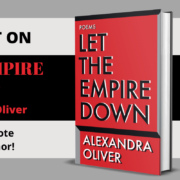 Spring is here and so is another title for our Biblioasis Spotlight series! To celebrate Poetry Month, we’ve decided to feature a quietly eerie collection of poetry from Alexandra Oliver, taking a trip across the ocean and slipping into homes, movies, and memories in Let the Empire Down (April 12, 2016).

And don’t miss a special note from Alexandra below, on her new collection Hail, the Invisible Watchman, which releases April 5!

LET THE EMPIRE DOWN

In her second book, Alexandra Oliver takes us on a journey of escape from the suburbs of Canada to Glasgow, Scotland. Training her eye on the locals—on the streets, by rivers, in museums, on playgrounds, in their own homes, in the ill-starred town of Lockerbie—Oliver travels back into her past while reflecting on issues of exile, memory and identity.

Excerpt from Let the Empire Down:

THE MEGABUS GOES BY SHERBERT LAKE 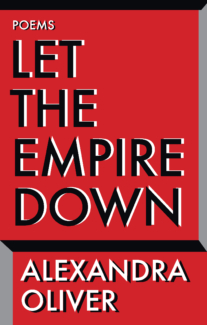 There’s the water tank that bears its name.
There’s its purple edge: the shore, the ship
that crossed the lake, beneath a heap of lime.
I went away. I gave the place the slip.

There’s the strip of mansions on the lee;
there’s the strap that ravaged my behind.
There’s the corner which they saved for me;
I made it out, and nobody will mind.

There’s the pier where people disappeared;
there’s the field of seven hundred crows.
The wind blows now. Convenient, ill-starred,
there it goes, forever. There it goes.

Alexandra Oliver was born in Vancouver, BC. She is the author of Meeting the Tormentors in Safeway (Biblioasis 2013), winner of the 2014 Pat Lowther Memorial Award, Let the Empire Down (Biblioasis 2016), and the chapbook On the Oven Sits a Maiden (Frog Hollow Press 2018). She is the co-editor (with Annie Finch) of Measure for Measure: An Anthology of Poetic Meters (Penguin Random House/Everyman’s Library 2015). A PhD candidate in the Department of English and Cultural Studies at McMaster University, she lives in Burlington, Ontario with her husband and son.

Pick up your copy of Let the Empire Down here!

On Her Latest Collection 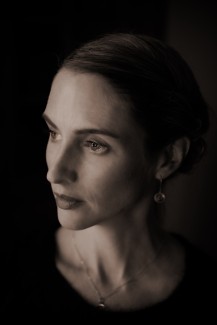 Hail, the Invisible Watchman is my third book; I suppose, loosely speaking, you could say it forms a triptych with Meeting the Tormentors in Safeway and Let the Empire Down, in that it deals with the grimmer underside of the suburbs, those elements which puncture the myth of cultivated, middle-class perfection. The fictional town of Sherbet Lake keeps coming up in all three collections, so perhaps you could call the whole lump The Sherbet Lake Trilogy. Just a fanciful thought.

What informed me in writing this particular book (and I suppose what makes it different from its predecessors) was that I found myself thinking specifically about what it is to be haunted—in this case, by loneliness and fear and isolation and what that does to one’s state of mind. The pandemic upped the ante. When it hit, people were driven indoors. There was this initial pot-banging “We’re going to beat this!” performance of enthusiastic resistance that took hold at the beginning, but then it wore off. People become afraid of going out or else went into complete denial. The political divide became a gaping chasm, and public discourse turned vicious, illogical. When I speak of the “Invisible Watchman”, I initially thought of that which watches us—consumerism, social media, the alt-right, the spectre of totalitarianism—but now I think it really means that hidden side of the self that threatens to cannibalize you at every turn if you’re shut away and living with uncertainty. I think being judgmental is one of those toxic threads—that particular theme weaves through the whole book but particularly through the last two sections.

Having mentioned all of this heavy stuff, I wanted the poems in the book to have a cinematic/tableau-like quality to them and an element of humour. I sort of imagine my reader holding up a View Master (remember those?) to the light and clicking through the reel thinking Okay, well that’s weird, I wonder if it’s going to get any … no, I guess not.

Take a look at Alexandra’s other work here!